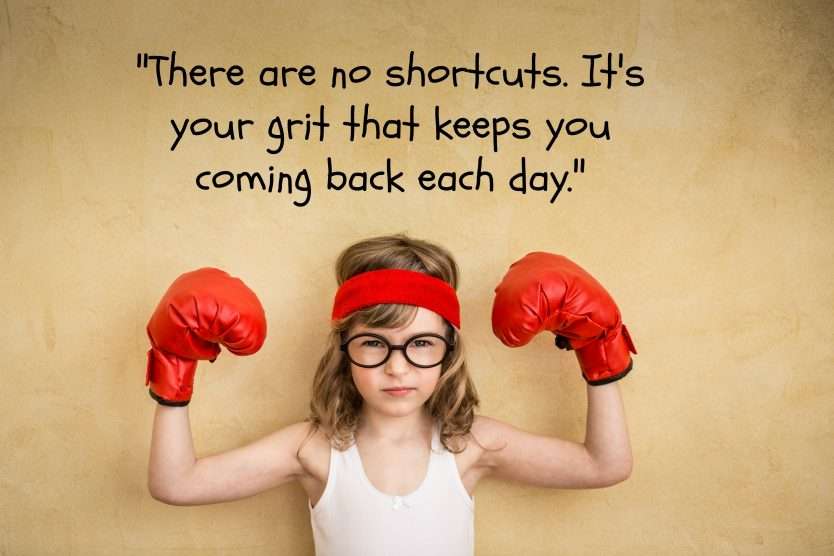 Quitting gets a bad rap because it’s often tied to laziness, a bad attitude, and giving up. Quitting too easily and too early isn’t a good thing. People give up for a lot of reasons including:

Too much quitting can become a problem. When quitting becomes chronic, it’s important to break the habit and develop the grit it takes to see things through.

Grit is the tenacity it takes to do difficult things, even when you don’t want to. No one loves a hard job, but sometimes things have to be done and it takes grit and determination to stick with it. Overcoming difficulties requires people to mature and endure challenges and in the end makes them better and more capable the next time around. Many times, what once was hard becomes easier thanks to experience and developing some grit.

Sacrificing isn’t always a bad thing, especially if you have a habit of giving up. Many people are unaware of how tough they really are. As the saying goes, if you want to know how strong a tea bag is, put it in hot water. It’s the same for you. Strength and grit are developed in difficult times. Embracing the situation and making sacrifices builds esteem, stamina, and develops grit.

Breaking the quitting habit and sticking with things may be painful- emotionally and physically. In the same way working out causes a lot of pain for the gains, so does developing grit. Growing pains are a natural part of the maturity process and should be seen as a positive thing rather than something to be avoided.

You Can Do Hard Things!

Not everyone has the inner drive for tenacity. If it wasn’t modeled or encouraged at home, it may feel foreign to dig deep and develop the grit to see things through. You can do hard things! Welcome the opportunities to grow and stretch your mind and body and see them as invitations to mature and level up.

Grit is the antidote to chronic quitting. Grit is the certain something that reminds you anything is possible and it’s worth the effort to stick with it even when it’s hard. Develop grit and learn to embrace change, discomfort, and adversity with the proper attitude and you’ll find yourself rising to new heights.